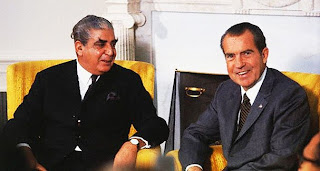 DECEMBER 16, 1971 and the fall of Dhaka should remind us in Pakistan of the follies of our leaders and the repercussions of unfettered military action against one's own people. It should also be a time to ponder over the role of our neighbour, India, in the dismemberment of our country and the complicity of the major powers, in giving legitimacy to this first break-up of a post-colonial nation since the end of the Second World War. The war in what was then East Pakistan was not the first civil war that had happened, although once India stepped-in it ceased to be a mere civil war, but it was the first war that split up a sovereign member of the UN and this was recognised by the UN. The Biafra case was also there but no one was prepared to grant recognition to this breakaway entity.

Our rulers' many sins of omission and commission must be highlighted for our future generations to ensure we do not make the same mistakes again - especially in terms of unacceptable "collective punishment" which only creates more enemies amongst one's own people, but what is equally important to understand is the role of India - first covertly then overtly. After all, the surrender of Dhaka was to India not to Bangladesh. At the time the US feigned support by trying to "send in" the Sixth Fleet - but in reality that never happened and the UNSC was not allowed to call for a ceasefire till the Soviet Union, the US and its allies were sure of the loss of East Pakistan. If we are unable to understand the Indian mindset and its approach to Pakistan, as well as US duplicity towards Pakistan, we will once again find ourselves in a similarly disastrous situation. Luckily for Pakistan, the Two Nation Theory proved its strength and so an independent Muslim nation of Bangladesh was created instead of East Pakistan being swallowed into Indian West Bengal! Again, Bhutto's masterpiece diplomacy through the OIC allowed Pakistan to recognise this new Muslim state and leave India out in the cold.

However, we should especially recall this traumatic event in our national life so that in times of crisis we know who our enemies are and where we may be committing the same blunders again in terms of military operations and political hardlines. Pakistan's biggest threat today comes from two main sources. First, the total disconnect that exists at all levels of national policy - which is allowing our enemies, be they the non-state actors comprising militants of multiple brands, or India and increasingly the US to do as they please within Pakistan's territory - and a government that is either unable or unwilling to correct this dangerous drift. Second, the unholy Indo-US partnership that is giving aid and succour to Pakistani militants and separatists.

The disconnect is reflected in the leadership's lack of clarity not only over policy but also over facts. Worse still, every time more than one leader speaks on an issue, they contradict each other. Take the case of evidence of Indian involvement in our terrorism and militancy issues - and that evidence is now more overt and substantial: we have had the interior minister stating that there was enough evidence to prove Indian involvement in FATA and Balochistan; but the foreign minister continued to insist that insufficient evidence existed. This mantra of his continued even after the prime minister himself had reiterated the growing proof of Indian involvement in Pakistan's terrorism problem. After sending out damaging contradictory statements, finally the foreign minister, probably having recovered from his constant jetlag, condescended to declare that there was enough proof to nail India. This is simply one example of unthinking statements made that do great damage to this country especially when the substance is missing in terms of action also. Why keep making statements on India's role in arming militancy in Pakistan without actually going to the next level and taking up the issue with India itself as well as on other international forums? Why not take it up strongly with India's strategic partner in this region, the US? As for the leadership's assertion that they will take up the issue with India "at an appropriate time", what exactly is meant by that, given the severity of the situation right now? No action and confused statements coming from the leaders bodes ill for the country.

It is no wonder that there is hardly any credibility when the government denies its culpability in conceding unprecedented ground to the US, including in terms of drone attacks. Now the COAS himself has publicly demanded from the US that they stop the drone attacks. This demand has come at a time when the US is threatening to widen the scope of the drone attacks to urban centres like Quetta. Moreover, Obama himself has declared that if there is "actionable intelligence" - and we have seen the American version of this in Iraq's WMD case - the US will strike inside Pakistan. Given that the US is already doing that through its drone attacks, presumably it is now also looking at boots on the ground in Pakistan. So, the question is, what will the Pakistan military do if the US does not heed the COAS's demand of halting drone attacks? We certainly have the technical capability to down a drone so should the PAF not do exactly that in order to make the demand credible. Otherwise, like the statements emanating from the political leadership, the military leadership's credibility will suffer a major dent - especially since the US continues to claim that its drone attacks are done with full support from the political and military leadership of Pakistan.

As for the Indo-US partnership, it is responsible for the free flow of arms from Afghanistan into Balochistan and FATA. Inside Pakistan, we also have US covert operatives defying all laws of the land with the Pakistan government unwilling to take any action. They keep testing our security network, supply arms to non-state actors and seek out our sensitive installations - all with impunity.

In this hostile environment, we are confronting expanding terrorism while the army conducts military operations in FATA in an operational environment devoid of any overarching political strategy. Yet, how long will we rely on the military-centric approach and how far will we use this in the rest of the country where terrorism is now striking? Can we really use drones and military action in settled and urban areas? And what is the US-India role in these acts of terror across Punjab and Peshawar? Who were the five US citizens caught in Sargodha? Spys trying to infiltrate the Taliban or US operatives targeting sensitive locations? Either way, this US game is threatening for Pakistan and should not be allowed.

If we stop to think of December 16, 1971, we will realise why we need to redirect our steps today away from the policies we are pursuing right now. Two immediate steps need to be taken. Distancing from the US and sending US covert operatives out of the country. Redirecting our military operations in FATA to more discriminatory actions against specific groups of militants and criminals - the divide and rule principle - and ensuring a politico-economic strategy as the guiding force. In Balochistan, immediate implementation of the political steps highlighted by the PM in Parliament. Mere words need to be replaced by deeds. Let us, for once, learn the correct lessons from perhaps the most traumatic moment in our history as a nation. We face the same enemies in a different garb; let us not make the same mistakes again. #

Shireen M. Mazari is a Pakistani academic, defence analyst, journalist and politician. She is currently working as the editor of the conservative daily The Nation newspaper
Posted by Bangladesh Watchdog at Friday, December 25, 2009