Bangladesh won its independence from Pakistan in 1971, but at a terrible price. Pakistan didn’t just oppose Bangladeshi liberation on the battlefield. It unleashed one of the most shameful genocides of the 20th century on ethnic Bengali citizens with the help of local extremist groups. As many as three million Bengalis were killed in just nine months and more than two hundred thousand women were raped and tortured.

As is the case with war crimes elsewhere, many decades later those responsible for the massacre are finally being brought to justice. In 2009, a domestic War Crimes Tribunal (ICT-BD) was established in Bangladesh to investigate and prosecute those accused of crimes against humanity.

Bangladesh’s war crimes victims deserve justice and so do their families. The passing of time cannot wipe away the horrors of that period even though many of those responsible for mass murder have avoided justice, some by taking refuge in foreign countries. Others have even worked their way into the country’s political establishment.

The purpose of the tribunal is to set right this great wrong. Over the past year, it and a second tribunal have heard evidence against two accused ringleaders of the genocide — Motiur Rahman Nizami and Delwar Hossain Sayeedi. The evidence against both is extensive, compelling and ghastly.

If they are found guilty, they likely will hang, as the death penalty is still part of Bangladeshi law. Verdicts may come at any time.

Nizami is not just an accused killer. He is also the head of Jamaat-e-Islami, an extremist group responsible for a wave of murder and violence across Bangladesh during the past year. Its attacks have resulted in 500 deaths. Jamaat has deep roots in the region going back to its collaboration with the Pakistani military during Bangladesh’s war for independence. Back then, Jamaat launched the fearsome paramilitary group called Al-Badr, which were death squads similar to Adolph Hitler’s SS during World War II.

Jamaat, in essence, it is a domestic terror organization with a political arm. It has worked since Bangladesh’s independence to destroy the country’s pluralistic constitutional democracy and to replace it with a primitive version of Sharia law.

Nizami faces 16 counts of crimes against humanity including genocide, murder, torture, rape and property destruction, all of which are based on eyewitness accounts. As Al-Badr’s chief leader during the genocide, Nizami is accused of either personally carrying out or ordering the deaths of nearly 600 ethnic Bengalis as well as the rape and the torture of many women.

Some of the worst atrocities came at the infamous Mohammadpur Physical Training Institute in Dhaka, which was a human abattoir reminiscent of Nazi death camps.

An entire of generation of Bangladesh’s best minds were wiped out at the Institute, tribunal prosecutors charge, because Nizami and other collaborators devised a systematic plan to torture and execute professors, engineers, artists and scientists. The plan was that if Pakistan could not prevent Bangladesh’s independence, it would seek to cripple the young state in its infancy by destroying its top intellectuals.

Mohammad A. Arafat, Executive Director, Shuchinta Foundation
Posted by Bangladesh Watchdog at Sunday, May 11, 2014 No comments: 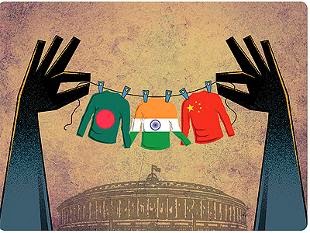 Whoever forms the next government in Delhi will have to face a host of serious foreign policy issues. Repairing frosty relations with the US without surrendering to Washington and carrying forward improving relations with China, simultaneously, would be the biggest foreign policy challenge for the new government. But the immediacy of settling the line on Bangladesh cannot be underestimated.

Former MEA secretary (east) Rajiv Sikri has observed that Bangladesh is India's most important neighbour — more important than Pakistan in many ways. India's military intervention in 1971 to create this new nation was motivated by her concern for its own insurgency-ravaged northeast.

A friendly Bangladesh was seen as the best guarantee for the security of India's east and northeast — a region afflicted by underdevelopment and prone to ethnic separatism, which was fuelled by strong support from both Pakistan and China.

Indira, Mujib's Legacy
Indira Gandhi's wisdom was carried forward by Manmohan Singh when he sought to carry bilateral relations with Dhaka to a new high. With Sheikh Mujibur Rahman's daughter Sheikh Hasina in power and willing to deliver on India's security and connectivity concerns, Manmohan's 2010 Dhaka visit set the stage for a huge breakthrough.

But Mamata Banerjee's fierce opposition scuttled the Teesta water-sharing treaty and made it difficult, if not impossible, to implement the land boundary agreement signed during Singh's visit. The security situation in India's troubled northeast is better than ever before after Bangladesh's crackdown on northeast Indian rebel groups based there.

Delhi-Friendly Dhaka
That the two ministers belonged to the BNP-Jamaat alliance and the arms were being smuggled with the connivance of senior functionaries of Khaleda Zia's government stands in stark contrast to the crackdown on the rebel groups after Hasina took charge. But a change of regime in Dhaka could make a lot of difference.

It is payback time for Delhi and the next government would have to find ways to carry forward the Teesta water-sharing deal and implement the land boundary agreement. BJP hardliners like Subramaniam Swamy have gone to the absurd extent of demanding Bangladesh land for settling illegal migrants from there.

The party will have to distance itself from such positions. Narendra Modi will have to refrain from talking about sending all Muslims in Bengal back to Bangladesh. If he takes his Rajdharma seriously, there is no way Modi can reverse Manmohan's Bangladesh policy.

If India fails to push the Teesta and land boundary agreements, no other country would take India seriously or come forward to resolve contentious issues. The BNP is already stepping up the heat on the Teesta issue.

On April 22-23, it organised a Long March to the Teesta barrage at Nilphamari in northern Bangladesh, blaming the Awami government for failing to clinch a deal with India. A low waterline in the Teesta is an emotive issue with farmers in northern Bangladesh. The BNP wants to corner the Awami League on this, after failing to dislodge it through an agitation leading to a poll boycott.

Tripping Over Hard Line
Hasina is understandably worried. A coalition of regional parties with Mamata Banerjee as an important player is her worst-case scenario because the Bengal chief minister would do all to block the Teesta and land boundary agreement.

With Congress looking on its way out and the Left not as influential as before, her only hope is a BJP government that does not pander to its hardliners like Swamy or Assam unit chief Sarbananda Sonowal, and implements India's sovereign commitments. Failure to do that would not only undermine India's credibility but also adversely affect its most trusted ally in the region.

In 2001, the BJP decided not to put its eggs in one basket and A B Vajpayee's national security adviser Brajesh Mishra rushed to congratulate Khaleda Zia on taking over as Prime Minister, even as Hindus were suffering one of the worst recent pogroms inflicted by BNP-Jamaat hardliners.

If Vajpayee got Kargil for Lahore, he was rewarded by heightened Bangladesh support for northeastern insurgents, a point the 2004 Chittagong arms case drives home.

Modi or any other BJP prime minister should not repeat that mistake because there is nothing to suggest the BNP-Jamaat combine would address India's security and connectivity concerns like Hasina has.

It is easy to argue Indian policy should not be regime-specific but what can Delhi do if some regimes warm up to it while others remain perpetually hostile. Bangladesh should be the first priority for the next government in Delhi.

The article was first published in The Economic Times, 8 May 2014

Subir Baumik is a writer, a veteran journalist, is now senior editor with Dhaka-based bdnews24.com
Posted by Bangladesh Watchdog at Thursday, May 08, 2014 No comments: