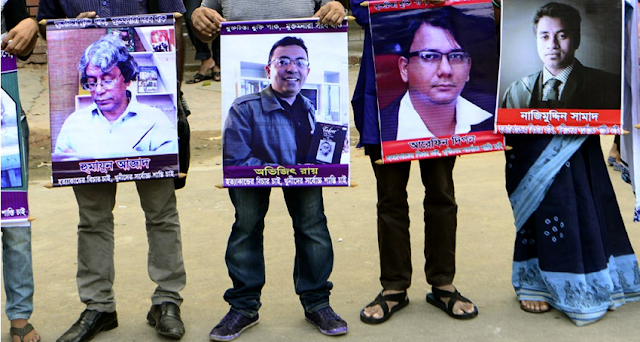 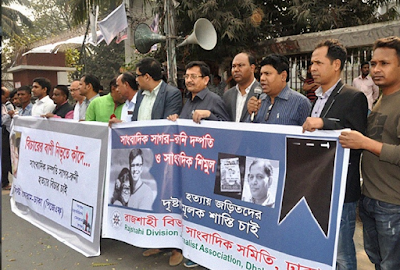 DOWNWARD SLIDE
The media in Bangladesh continued to experience intimidation, harassment, attacks and arrests during the period May 2016 to April 2017. Bangladeshi journalists and freethinkers to be framed, attacked and killed for exposing corruption and reporting the news. The downward slide of press freedom in Bangladesh continued in the reported period. Although freedom of expression and freedom of the press are constitutionally guaranteed for every citizen of Bangladesh, the governments enacted various laws hindering these rights. The increased offensive of extremist groups, though not targeting journalists directly during the period of the review, continues to remain a big threat.

Most of the intimidation, detentions and arrests were made under the infamous cybercrime law, Section 57 of Information and Communication Technology Act of 2006 (ICT Act). The draconian law has taken a heavy toll on journalists, bloggers, human rights defenders and social media activists, especially users of Facebook. The period has also been challenging for print and electronic media.

The ICT Act, which empowers law enforcers to arrest any person without warrant, has a maximum punishment of 14 years imprisonment. Section 57 of the law criminalises ‘publishing fake, obscene or defaming information in electronic form.’ Critics say that several provisions of this law are either vague or unnecessarily criminalise legitimate expression and recommend that clauses 46 and 57 of the ICT Act should be repealed in their entirety.

ICT ACT CHALLENGED
Considerable confusion exists within government circles about the draconian law. Several contradictory statements have emerged. The authorities in August 2016 announced that the government was set to amend the ICT Act, but did not set a timeline or comment on scrapping of the law completely.

The government said it was contemplating abolition of Section 57 of the Information and Communication Technology (Amendment) Act, 2013, by enacting a new law, the ‘Digital Security Act, 2016’, which has been prepared by the Information and Communications Technology (ICT) Division. The explanation given for the proposed amendment was that the law conflicts with four Articles of the state constitution and also muzzles the freedom of speech and expression of the media.

However, the proposed draft of the Digital Security Act has drawn some criticism as well and there are fears that it could be more repressive than the existing ICT Act. The draft Act proposes setting up a Digital Security Agency for monitoring and supervising digital content; communications mediums including mobile phones to prevent cyber-crime; a Digital Forensic Lab; and a Bangladesh Cyber Emergency Incident Response Team (Bangladesh-CERT). The Digital Security Agency would be able to order a ban on communication in extraordinary situations on any individual or service provider and these agencies could be legally mandated to carry out activities such as internet shutdowns or surveillance contrary to freedom of expression and press freedom.

The proposed Act also has provisions to control cyber crimes in the form of hacking, impersonation, violation of privacy; and states that ‘any derogatory comments, remarks, campaign or propaganda in electronic media made by a person, institution or foreign citizen, against the war of liberation, or father of the nation or any issue that has been settled by the Court shall amount to an offense’ which are ‘cognizable and non-bailable’. The offense carries punishment ranging from three years in prison to life imprisonment and/or a hefty fine. The wording leaves huge gaps in interpretation and journalists could face a tougher time for their writing published online.

A writ petition was also filed with the High Court on August 26, challenging the legality of Section 57 of the ICT (Amendment) Act, 2013, according to which, if any person deliberately publishes any material in electronic form that causes law and order to deteriorate, prejudices the image of the state or person or causes hurt to religious belief, the offender will be punished for a maximum of 14 years and minimum seven years of imprisonment. The petition placed before the High Court, challenges the section and notes that the provision is in conflict with Articles 27, 31, 32 and 39 of the Constitution. The Editors' Council has demanded cancellation of subsections 1 and 2 of Sec 57 of the Act, saying misuse of those subsections can hinder freedom of the press.

However, in the face of the outcry by media leaders and rights groups, Information Minister Hasanul Haq Innu argued in favour of the controversial Sec 57 of ICT Act.

On January 10, 2017, Bangladesh Law Minister Anisul Huq said the new law on cyber security would supersede the controversial section 57 of the ICT Act.

Nervous about social media networking platforms, especially Facebook, the government published draft guidelines in March 2016 for the civil administration officers on use of social media. The 11-point guideline, advises government officials on how to use their official and personal accounts in social media. The guideline will be applicable for all ministries, departments, agencies, field-level offices, educational and training institutions. In a circular issued to civil administration officers in districts and small towns on October 28 2016, the cabinet division observed that some field-level officials were sharing personal matters on Facebook, unrelated to their work.

PRESS IN PERIL
Media workers in Bangladesh continued to face risky situations while reporting. On February 2, 2017, 40-year old Abdul Hakin Shimul, a local correspondent of the Bangla-language daily Samakal in Shahjadpur, was shot in the face while covering clashes between rival factions of the ruling Awami League. He died on following day, when he was rushed to a hospital in capital Dhaka. Police have arrested Shahjadpur municipality Mayor Halimul Haque Miru, the prime accused, and the ballistic test report has confirmed that the bullet found in Shimul's body was fired from the mayor’s shotgun. The mayor and other accused are being investigated by the police after the victim's wife filed a murder case against 18 people, including the mayor and his two brothers.

Veteran journalist Shafik Rehman, editor of Bangla monthly magazine Mouchake Dhil and advisor to opposition leader Khaleda Zia, was arrested in April 2016 for allegedly attempting to abduct and murder Prime Minister Sheikh Hasina’s son Sajeeb Wazed Joy in the USA. Rehman had been in detention since his arrest, including the prison hospital after his health deteriorated. He was placed in solidarity confinement in prison.

On August 16, 2016, the IFJ, Reprieve, Index of Censorship, Reporters Without Borders and 21 other international press freedom organisations had written a joint letter demanding the immediate release of Rehman. The joint letter that was sent to Bangladeshi Minister for Law, Justice and Parliamentary Affairs, Anisul Huq, called for Shafik’s immediate release on the grounds that after more than three months since his arrest, he has been detained without charge and his health is deteriorating. On August 31, the highest court of the country granted bail to octogenarian journalist Shafik Rehman.

On June 11, 2016, a dozen people assaulted reporter Shakil Hasan and cameraperson Shahin Alam of Jamuna TV as they were reporting on the illegal polythene bag factories in the old city of Dhaka.

On January 26, private TV network ATN News cameraperson Abdul Alim and its reporter Ahsan Bin Didar were assaulted and beaten by police during protests by activists of a movement demanding the halting of a coal-fired power plant in the Sunderbans mangrove forest. Riot police with bullet-proof vests along with shotgun-wielding-officers pounced upon the cameraperson without any warning. Alim was pushed to the ground, and kicked with boots and struck several times with batons and shotgun butts. He needed three stitches on his right eyebrow as a result of the beating.

JOURNALISTS OR CYBER CRIMINALS?
By far the largest number of arrests was made under the ICT Act, bringing into sharp focus the misuse of the law. According to Deutsche Welle, more than 100 arrests have been made under the ICT Act for alleged defamation of the Father of the Nation and his kin. None of these cases were filed by the victim; rather, party men took the matter to court.

On July 12, police had arrested a reporter of a largest circulated local daily Prothom Alo Asaduzzaman Obaed Ongshuman, who is the accused in two cases, including extortion and the notorious ICT Act. Ongshuman was in the court office and was browsing into court documents to determine how many suspects were given bail on drug trade related cases by Chief Metropolitan Magistrate Court in capital Dhaka. Some lawyers who were present in court office had an altercation with Ongshuman. He was punched and dragged against his will to the Dhaka Lawyers Association office across the street, where he was confined in the offices.

The RAB filed a case against the journalists under the ICT Act. Following the arrests, the government’s Press Information Department (PID) cancelled press accreditation cards for nine journalists from banglamail24.com, without providing a reason.

Later in August, the Dhaka Cyber Tribunal granted bail to the three journalists Shahadat Ullah Khan, Maksudul Haider Chowdhury and Pantho Polash.
On September 1, 2016, Siddiqur Rahman, the editor of an specialised education portal ‘Dainik Sikkha’ (www.dainikshiksha.com) was arrested for publishing six news articles on corruption and favouritism of senior officials of the Department of Education. Rahman, an award winning reporter was detained after Prof. Fahima Khatun, wife of a ruling Awami League parliamentarian Obaidur Muktadir and also sister of Food Minister Kamrul Islam, filed a case under Section 57 of the ICT Act. Khatun, the former Director General of the Higher Secondary Education Directorate, claimed that news claiming corruption during her tenure in the Directorate, ‘defamed and tarnished’ her image and that of the state.

Police spokesperson said, he was arrested on charges of 'cyber crime' by publishing what it described as multiple “fictitious, false and shameful” news on his portal.

The university’s pro-government Chhatra (Student) League unit filed a case against the left leaning students’ organisation leader under the Section 57 of Information and Communication Technology (ICT) Act for his two posts in less than an hour.

On December 24, police arrested Nazmul Huda a correspondent for private satellite network Ekushey TV (ETV) from Savar, in the outskirts of capital Dhaka for inciting unrest with garment workers over wages and benefits. Huda, is also the local correspondent of largest circulated Bangla daily Bangladesh Pratidin. He was accused of "inaccurate reporting" on almost daily protests in Ashulia, home to the industrial zone which produces garments worth USD 30 billion for export, said the local police officer-in-charge.

Journalist leaders and media were baffled to hear that the journalist has been booked under section 57 of ICT Act. Huda's arrest comes after mass protests by thousands of workers prompted the closure of 55 garment factories in Ashulia.

Both are news portal of a pro-opposition Bangla daily that was shut down in 2013, following government’s cancellation of its license. The BTRC said they were blocked ‘for making objectionable comments about the government’.

After few days, the telecom regulator decided to scrap licenses of 204 internet providers as they allegedly failed to provide operational documents to it after frequent requests.

An order has been issued and copies of the letter effective from August 25 have been sent to the Internet Service Providers (ISP) concerned.

In 2016, the Freedom House’s Freedom of the Press report noted that Bangladesh slid down to ‘not free’ from a ‘partly free’ status due to increased hostility against journalists and freethinkers. The government received a lot of backlash for not initiating concrete action to tackle the situation. The government made no efforts in the period under review to improve the situation and the country remains at the dangerous edge of falling further in its press freedom status.

The threats and attacks on journalists from extremists, the harassment on media using repressive laws such as ICT Act, and the increased self-censorship due to fear has led to a situation where independent media and critical opinions are fast perishing.