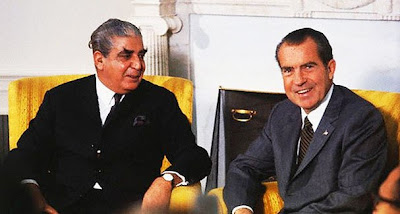 Photo: Yahya Khan with President Nixon in the White House

IN THIS In his landmark poem, The Wasteland, T. S. Eliot calls April the cruellest month. But to most people, December is the cruelest month, with its short days and long nights. To Pakistanis and Bangladeshis, the darkest December is the one that came in 1971. What happened then is well known. Why it happened is less well known.

Ambassador Arshad Sami Khan provided his take on the events in his memoir, Three Presidents and an aide. A fighter pilot who earned the Sitara-i-Jurat during the 1965 war, Sami was ADC to presidents Ayub Khan, Yahya Khan and Zulfikar Ali Bhutto. Historians have pinned the blame for the secession of East Pakistan on Gen Yahya. Without absolving Yahya of his weaknesses, Sami says that a good part of the crisis predated the general’s arrival on the political scene.

At partition, Pakistan was split into two wings that were 1,000 miles apart. Many, including Lord Mountbatten, had questioned whether the glue of religion would be strong enough to hold them together. Since the two wings did not share a common language, it made no sense to impose a single language on them. Imposing Urdu, a minority language spoken in the west, made even less sense. But that was precisely what was done in 1952. Deadly language riots ensued in the east.

In the years to come, the west continued to rule the east. The Bengalis felt like they had traded one colonial master for another. The general elections of Dec 7, 1970 provided an opportunity to redress the grievances of East Pakistan and promote national integration. But the divided demographics delivered a politically explosive result.

The Awami League (AL) emerged with an absolute majority but all its seats were located in the east, where 55 per cent of Pakistanis resided. Sheikh Mujib, its leader, was called the future prime minister by Gen Yahya. Sami says this was just a façade. Yahya had never intended to hand over power to the civilians, least of all to the Bengalis. He had hoped that a fractured coalition would emerge, allowing him to continue as the all-powerful president.

He began to pressure Mujib into accepting a strong presidency with several ministries under the direct control of the president. When that failed, he tried to hatch a power-sharing arrangement between the AL and the PPP headed by Bhutto. That also failed. By now, the AL had sensed a trap and began a campaign of public agitation. Yahya accused the party of wanting to secede and playing into India’s hands. Sensing an opportunity, says Sami, Bhutto gave Yahya a strong hint that he would support a military solution. Yahya’s commander in the east, Lt-Gen Sahibzada Yaqub Ali Khan, opposed military action. His counsel was ignored and he was replaced by a man who would be reviled in history as the ‘Butcher of Bengal’.

Gen Tikka Khan launched a ruthless operation to crush the AL on March 25, dashing all hopes of making a democratic transition. Ironically, on that day the National Assembly was to have been convened in Dhaka. By June, the regime claimed that the insurgency was over. In reality, it had simply gone underground. Millions of refugees fled to Indian Bengal to escape the violence.

As autumn approached, Yahya realised that India was not going to sit idle. Bhutto was sent as the head of a military mission to Beijing with Lt-Gen Gul Hasan and Air Marshal Rahim. According to Sami, when these people returned home, they lied to Yahya and told him that if hostilities with India broke out, crack Chinese troops would cross the Himalayas to relieve pressure on the Pakistani garrison in the East.

Sami’s insightful recounting of history is pregnant with lessons. First, even with its two far-flung wings, Pakistan was not destined to break apart. No one had forced East Bengalis to join Pakistan. To preserve the union, the leaders in the west should have shared power with those in the east.

Second, during the 1965 war, East Pakistan felt abandoned with little military presence. West Pakistan proceeded to rub salt into the wounded psyche of the east by imposing upon it the humiliation of the Agartala conspiracy trials. These diverted attention from the post-war problems in the west and were designed to project the image of India as a perpetual enemy. The mass movement that unseated Ayub Khan later was conveniently blamed on India.

Third, even at this point, Pakistan’s unity could have been preserved. Mujib was willing to compromise on several of the Six Points. Instead, the regime blundered by not honouring the electoral outcome. A campaign to malign the winning party was launched. The AL’s unprecedented victory was blamed on the Indian intelligence agencies as if they could have duped the entire populace of East Pakistan into voting against their will.

Fourth, when the AL leadership refused to buckle, another blunder was committed by resorting to armed force on the presumption that the rebellion was confined to a few ‘miscreants’. The regime seriously over-estimated its ability to subdue a province of 75 million with a military force of 45,000.

Instead, the regime conjured up dreams of Chinese and American intervention. The Indo-Soviet Treaty had neutralised China’s ability to mount any military operation against India. And the Vietnam War had sapped the ability of the US to get involved in a second Asian war. The salience of both developments was lost on Yahya and his advisers. They had naively expected their allies to bail them out.

And sixth, for three decades all governments that came after Yahya suppressed the Hamoodur Rehman Commission report into the war. It only saw the light of day when an India publisher posted it on the web.

Unless the bitter lessons of what befell Pakistan 38 years ago are shared widely with the people, the nation will continue to wallow in conspiracy theories. It is much easier to blame others than to blame oneself. But, as the Greek historian Polybius put it, ‘There are only two sources from which benefit can be derived: our misfortunes and those that befell other men.’ #

First published in The Dawn, Karachi, Pakistan, Monday, 07 December, 2009
Ahmad Faruqui could be reached at Ahmadfaruqui@gmail.com
Posted by Bangladesh Watchdog at Tuesday, December 08, 2009