Charter for Change now belongs to the nation 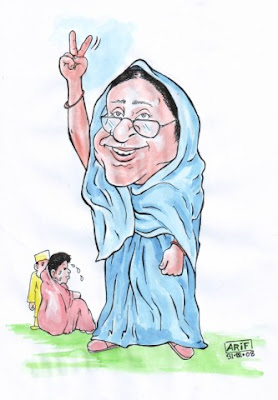 INCIDENTALLY, it was also in a December day some 38 years ago, following the historic verdict in favour of the famous Six-Point program in the general election of 1970, the then AL chief, Bangabandhu Sheikh Mujibur Rahman declared: "The AL's Six-Point program is not a program of AL anymore; it belongs to the nation. AL has no right to deviate from it."

Bangabandhu kept his word and we got the independent and sovereign Bangladesh, albeit at a very high price. The grateful nation crowned him with the supreme laurel -- father of the nation.

Many political pundits have drawn a parallel between the victory of AL in the just concluded general election and that of 1970. This time around, it is a resounding mandate in favour of the "Charter for change," the election manifesto of AL. Bangabandhu's Six-Point program was formulated in the backdrop of deprivation of the Bengalee people within the state of Pakistan, predominantly in the arena of political rights, and less on any specific agenda on economic emancipation, albeit the former is an indispensible pre-requisite to achieve the later.

This time around, however, the AL"s charter for change is primarily an economic platform to free the nation from the yoke of poverty, corruption, terrorism and the abuse of state authority. The manifesto is very much a forward looking document, outlining specific sector by sector targets (a bit ambitious at times), and it attracted the voters' attention and the subsequent creation of enthusiasm, especially among the younger ones, which apparently translated into the AL-led alliances' massive victory in the election.

This is probably for the first time in the history of Bangladesh that an election manifesto had generated so much interest in the electoral domain of the country. The unbridled corruption, terrorism, and wanton disregard for the rule of law by the strong and the powerful in the past BNP-led government collectively contributed to the desire for change among the masses.

In addition, the AL chief has run more or less a flawless campaign throughout, mostly outlining her vision for the nation until 2021, the golden jubilee of the birth of our nation. In the process, it seems that the AL chief has also transformed herself to lead not only the AL but also the nation to its destiny.

Last July, I had the distinct honour of acting as the lone speaker (beside her local party activists) in a largely attended congregation arranged in her (she claimed to have read all my articles in DS while in jail) honour in Toronto, where she outlined the draft of her "vision 2021," which was subsequently included in the charter for change.

In her speech, by addressing the dream of the future generation, not the next election, she rightfully portrayed herself as a statesman, rather than a politician. It would not be any exaggeration to note that her articulation in the recently delivered speech (I watched it live on TV) in a business forum would remind anyone of the same exhibited by Barack Obama in the recently held US election.

Aside from her programs, which affect the day to day lives of the citizens, economic uplifting of the toiling masses and a promising future of our next generation, one the most striking aspects of the manifesto was the bold inclusion of the pledge to try the war criminals. While formally announcing the salient features of the manifesto in a local hotel, it would be only incumbent on the wisdom of the soon-to-be prime minister to recollect that she received the most thunderous applause from the audience when she declared that the "war criminals will be tried."

Due to the relentless campaign of the Sector Commanders' Forum, in conjunction with the conscious citizens, there has been a huge resurrection of the hatred against those who directly collaborated with the perpetrators of one of the worst genocides of human history, especially among the members of the new generation, thereby virtually annihilating all the alleged war criminals and their patrons from the electoral map.

Since it is an extremely dominant issue that has made its rightful place in the election platform, the massive approval of the people to try the war criminals is very loud and clear. It is now the responsibility of the would-be government to initiate the process, including the solicitation of help from the UN and the international war crime tribunals. Any faltering or dilly-dallying would be tantamount to going back from the Charter for Change, which now belongs to the nation, not to the AL any more.

While analysing a few points of the BNP's 36-point election manifesto in a piece entitled, "A manifesto of mockery" for DS (December 18), I wrote: "The election manifesto is a big challenge to the memory of the people, who are the ultimate arbiters in deciding the fate of a political party." In fact, the "shock-and-awe rout for the BNP" on December 29 clearly proved that the people were in absolute control of their memories while delivering their verdict.

If the AL leadership fails to take proper cognisance of the brazenly broken promises behind BNP's disastrous fate this time, it will only pave the way for the history to repeat itself. #

Dr. Mozammel H. Khan is the Convenor of the Canadian Committee for Human Rights and Democracy in Bangladesh
Posted by Bangladesh Watchdog at Monday, January 05, 2009