Why Bangladesh should have nothing to do with Gwadar Port 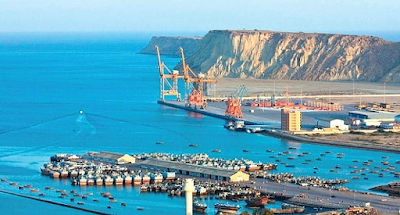 Balochistan, once an independent nation has remained occupied by Pakistan

A columnist has urged that Bangladesh should use the controversial Gwadar port located in Pakistan occupied Balochistan to benefit from trade, commerce and shipping. The multi-billion-dollar port built by China–Pakistan Economic Corridor (CPEC) and other projects worth $62 billion as of 2020 has invited miseries and agonies for the fiercely independent Baloch ethnic community.

The occupied province of Balochistan is the only resource-rich region in a militarised nation – Pakistan. It possesses minerals including coal, sulphur, chromite, iron ore, barites, marble, quartzite, and limestone. It has the largest reserves of copper and gold in the world besides being blessed with huge oil and gas reserves. Gwadar port, it is said, has brought a new dream for the region.

The columnist possibly has undermined the political wisdom of Bangladesh prime minister Sheikh Hasina. He has failed to read the mind of Hasina.

She is presently not willing to improve diplomatic ties with Pakistan unless the country makes a public apology for war crimes committed causing deaths to three million, mostly Hindus by the Pakistan military during the bloody birth of Bangladesh independence in 1971.

The article published in Pakistan media is written based on half-hearted research and poor understanding of the region. He suggested that Bangladesh should use the Gwadar port to boost trade and can reach Western China, Central Asia, Pakistan easily.

On the ploy of the friendship highway to reach China, Pakistan has forcibly taken administrative control of the picturesque Gilgit-Baltistan. The princely state has borders with Jammu and Kashmir, Ladakh in India and China. After reaching the border, the highway connects Xinjiang in Western China. There is no connectivity to Central Asian countries (Uzbekistan, Tajikstan, Kyrgystan and Kazakhstan) as Chinese hegemony has ushered in dispute with the countries of the former Soviet Union (USSR). The CPEC, a debt trap project for Pakistan, the KKH expressway is built to reach the Gwadar Port through the heartland of restive Balochistan.

Balochistan, once an independent nation has remained occupied by Pakistan with full knowledge of its founder Mohammad  Ali Jinnah. When the Baloch nation gained its independence [on 11 August 1947] from British Raj, before the independence of Pakistan, Jinnah persuaded the Khan of Kalat (Balochistan) to merge with Pakistan.

Jinnah was incidentally a lawyer of Khan of Kalat and others and appeared on behalf of them in Karachi High Court. He knew the weaknesses and secrets of Kalat’s business and state properties.

Later, Jinnah succeeded in deceiving some key leaders and tribal chiefs of Balochistan in signing the agreement of their political will to merge with Pakistan.

The majority members of the Balochistan parliament condemned the action and petitioned the Pakistan government of its illegal accession agreement signed by some leaders who were dubbed as ‘betrayal’ against the Baloch.

Soon after, the Pakistan Army brutally occupied the territory on 27 March 1948, which is observed as ‘Black Day’ and the rebellion launched by mainstream tribal groups to bifurcate Balochistan from Pakistan occupation.

Pakistan security forces continue to commit atrocities in Balochistan. Tens of thousands are victims of enforced disappearances and are a regular phenomenon in restive Balochistan.

Balochistan grievances with Pakistan began from the denial of a fair share in the natural resources and the unabated persecution of Baloch ethno-nationalists.

The dirty war in Balochistan erupted after Pakistan’s military dictator Pervez Musharraf send commandos and helicopter gunship to raid the cave of ethno-separatist rebel leader Nawab Akbar Bugti was camped his military headquarters. The raid brutally killed him in 2006 and his death sparked a bloody wave of Baloch insurgency.

Islamabad often claimed that they have evidence of Indian hand and Afghanistan intelligence in the supply of weapons to the Baloch insurgents, which Delhi always denied.

In June 2020, the Pakistan National Assembly in Islamabad heard the Balochistan National Party’s Chairperson Akhtar Mengal scathing speech and asked that the province that he represents be declared “occupied Balochistan” if the state wants to continue its human rights abuses in what is currently a “no-go area” spearheaded by “death squads.” Without naming the military, Mengal castigated the crackdown in Balochistan, and the growing number of missing persons, which has reduced the locals to mere “bloody civilians.” Drawing parallels with Bosnia, Palestine, and Kashmir, the lawmaker accused the state of colonising Balochistan, rendering the blood of the Baloch “less worthy than tomatoes.”

To conclude, China has usurped Hambantota port in Sri Lanka after the latter failed to pay the debt. In near future, Gwadar port will fall through the cracks of the debt trap.  According to Pakistan’s mainstream newspapers, there are serious doubts that the ports will become a regional trade hub in the region.

The author is an independent journalist, media rights defender in Bangladesh. Recipient of Ashoka Fellowship and Hellman-Hammett Award. He could be reached at saleemsamad@hotmail.com; Twitter: @saleemsamad